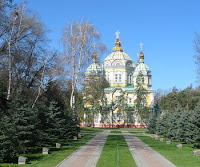 Almaty used to be the capital of Kazakhstan until 1998. Although the country has lost this status, it is still the most popular city in the country. It is undoubtedly the most progressive city in the country as remarkable structures with Russian influence and scenic nature in different areas of the city. Almaty literally means “Apples” as different types of apples could be found in different areas of the city. You can easily arrive in Almaty as most airlines have direct flights to the Almaty International Airport.

You don’t need to spend much in Almaty. You can visit two remarkable structures with Russian influence right in the city: the Zenkov Cathedral in Panfilow Park and the Central State Museum. Interestingly, the Cathedral was built without any use of nails. The museum on the other hand, will show you the Russian influence on the country.

But don’t just limit yourself to the wonderful parks in the city. Go outside a little bit and enjoy the scenic nature Almaty has to offer. Less than 20kms south of the city is the Zalaisky Alatau Mountain. The mountain is divided into two areas based on its heights: the Medeu located at 1700 meters above sea level and the Shymbulak which is at 2300 meters. You can enjoy skiing at Medeu and visit the massive Olympic stadium. If you’re into skating, you’ll find yourself challenged in the speed skating area in Medeu. Shymbulak on the other hand has a scenic resort for tourists.