The fading glory of Crawford, Texas 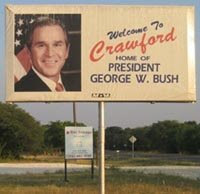 Crawford, Texas is a small rural town found in the central west portion of the state. With less than a thousand inhabitants, the town is considered an agricultural area as you can see ranches, acres after acres of crops and the local here have a simple way of living their lives without the busy streets of a city life. All seem simple in Crawford except for one fact: this town is the home of the soon to be outgoing president of USA, George W. Bush. For at least eight years, the town has become a tourist destination for different individuals as they take time to visit the ranch where the current president relaxes from time to time.


But the appeal of Crawford to tourists around the country is slowly going down. During the first years of the current president's reign, the town was filled with tourists almost every day. When the president is in town, the number of people also increases. Even anti-war protesters have also set up a small office here so that they can easily converge when they need to get out and speak their voice.

Even the local souvenir shops are rarely open as fewer travellers end up in this part of Texas. The anti-war office is also closed. Slowly but surely, the town is going back to its normal conditions as the presidency of George W. Bush comes to an end.