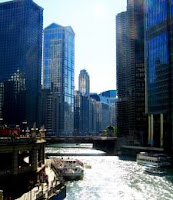 Barack Obama’s victory on the last presidential election has presented a rare opportunity for his city to become a tourist attraction. Chicago, Illinois is making some changes on its image as they are now marketing it as the city of the President of the USA. Right now, people come from different parts of the country to have a glimpse of the house in downtown Chicago. Although it’s heavily guarded by Secret Service, it’s still visible from afar.

Souvenirs of the elected president are now common in the city. Restaurants and book stores that Obama used to visit are now flocked with tourists eager to learn what the president eats or reads. One restaurant has reportedly sold thousands of shirts that says “Obama Eats Here.”

The city offers a wide range of hotel accommodation, the cheapest we have found starts from £34.19 per night but it pays to breathe the same air as the president.

The tourism and the historical agency of Chicago are now revamping their guided tours as this will now include the activities and background of Barack Obama before becoming president. Plans are now being carried out to properly mark the special places that are pivotal to Obama's success for his White House bid. The area where he gave the speech that declares his intention to run for the White House and the speech where he introduced Joe Biden will now have a marker.

There are now unofficial guided tours around the city wherein you will be taken to different areas in the city related to the president such as the school where he taught law and even the barber shop.