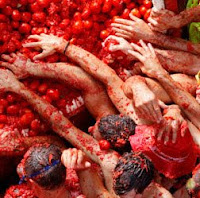 The last Wednesday of August is a day of fun in Bunol, a town near Valencia (Spain) as the La Tomatina Festival is being held on that day. Thousands of people flock to Bunol from around the world to take part in the battle of tomatoes where thousands and thousands of ripe tomatoes are thrown around the town that leaves the street filled with tomato rot.

It’s not just a tomato throwing activity although it is its highlight but it’s also a fun activity with parades and dancing with great music and fireworks too! Before the tomato fight, there is a contest for paella cooking.

Bunol has a population of around 9,000 but during the La Tomatina Festival, the number of people in this town balloons to over 30,000 people. Of course with the sudden increase of people coming here, the hotels and inns could not accommodate the visitors which are why many would come and stay at Valencia which is just a bus ride away from Bunol.

It is indeed a fun activity and it’s a harmless fight of tomatoes that can still hurt you especially if thrown at a far distance so be warned and wear the necessary protection. Rotten tomatoes stink too but it’s a lot more fun that way. The La Tomatina Festival had been featured in travel shows worldwide several times already and it’s a pride of Valencia, Spain.

This is one festival that could be perfect for our next video shoot. I'd be sure to pass this along to my readers. Great post!

They had great fun on the 26th of August 2009 there :)
With all the fun, I'm not sure I want to become a hija del tomate (daughter of tomato). Asereje ja je jebe tu dejebe sebiunoubamajaba e de budiedebudidipi.