Boring and Dull: two towns joined together in tedium 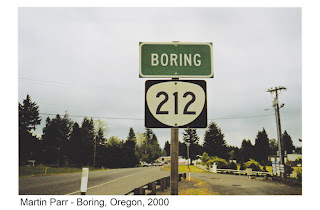 Somebody tell photographer Martin Parr that the town of Boring, Oregon is celebrating its name many years after Parr took a series of amusing photographs of the town and its various Boring attractions. And this time Boring is teaming up with its Scottish counterpart – a village called Dull.

The two synonymous locations, Boring and Dull, ‘twinned’ with one another on August 9th last year after a Scottish tourist mentioned the similarity between the two. As such, Boring and Dull Day will take place on the same day this year to celebrate the anniversary of their Boring and Dull pact (sorry). Typically, the residents of both towns seem stuck for suggestions as to how they’ll celebrate, so the events really could live up to their names.

The humour doesn’t stop there. Because Bill Kennener, the representative of Boring who made the announcement, did so in a manner that has been described as “deliberately meandering."

He said: "While some might be inclined to call this frivolous, the reality is that this attention is attracting tourism and commerce."

Just as we suspect Bob Diamond won’t ever lose his taste for the valuable, Boring and Dull aren’t blessed with a wealth of entertainment on their doorsteps. But this doesn’t mean you shouldn’t visit either of these charming towns, or both, whose residents at least appear to have a sense of humour. If nothing else, you can amuse yourself as Martin Parr did: by taking pictures of the signs.

It makes you wonder if people stop and think before naming a city or even a street sign for that matter. A city named Boring certainly would not create excitement, but it could create some buzz for the city.