The World's Most Popular City in 2013 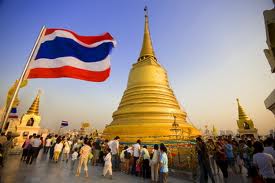 Ever wondered what the world’s most popular travel destination is? London, New York and Paris all get their fair share of visitors, that’s for sure.

What about the world’s holy destinations which receive floods of religious pilgrims each year, such as Mecca, Jerusalem and the river Gangees? They receive a lot of travellers, but they’re nowhere near the top of the Mastercard Global Destination Cities Index.


Because the winner is… Bangkok!

That’s right, the Thai capital narrowly edges out London, and is the first Asian city to top the poll since its inception three years ago.

With an estimated 16 million arrivals, London came top last year in large part due to the Olympics, and still seems to be riding high on the back of the well-received sporting event, coming ahead of New York with 11.5 million visitors estimated for 2013.

I have visited Bangkok 5 times in my life. The place has attracted me most. I want to visit there again. Can you mention about the best hotels in the city?