The Weirdest Island in the World - Socotra 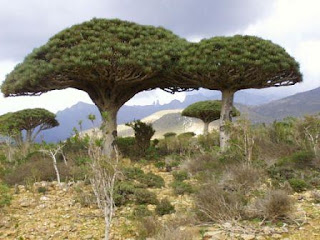 The most popular tourist destination in Yemen is also one of the most isolated islands in archipelagos in the world. The Socotra Archipelago is a group of islands that are part of Yemen although it’s a lot closer to Somalia in the Indian Ocean. Even though Socotra is an archipelago, the largest island represents more than 90% of the archipelago’s landmass.

The popularity of Socotra is not based on the fact that it’s a very isolated island in the Indian Ocean. Because the islands are far from the mainland, the flora, fauna and animals that live in Socotra are often endemic. It is estimated that one-third of the island is endemic which means more than 30% of the plants and animals that live on the island are only found there.

The Dragon’s Blood and Other Plants
The most popular and unique tree found in Socotra Island is the “Dragon’s Blood”. It looks like a giant mushroom or an umbrella-like tree. The tree is named after its red sap and was believed to be dragon’s blood. It’s currently used as paint or even varnish because of its color. Another unique tree is the Giant Succulent Tree, Cucumber Tree and Socotra Pomegranate.
Endemic Animals
The only mammal that calls Socotra Island its home is a bat. The island is full of unique looking birds and many of them are already endangered because their population is really small in relation to the island. The sparrows and warblers in the island are unique species endemic only to Socotra.

wow, this sounds amazing. It must be really interesting to be on an island with a lot of nature and creatures, that are not to be found elsewhere. Those Dragon's Blood trees really look like some gigantic mushrooms.

pure nature can be so inspiring and be such a beauty.

Wow, I need to add visiting this island to my bucket list. While Australia is known for its unusual wildlife, Socotra is relatively unheard of.

How nice the creation of almighty Allah. The tree is so much beautiful and eye catching. Petter Joe