The Pamukkale in Turkey 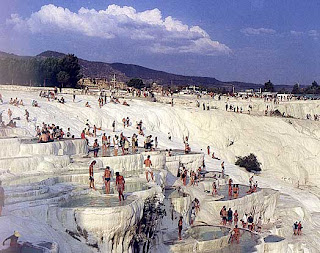 Turkey is known for good weather and a hot climate however many people that visit Turkey frequently may not know about is natural phenominon the Pamukkale or Cotton Castle in English.
Despite the look of the Pamukkale they are actually hot springs and not snow covered mountains and are located in Denizli Province in south-western Turkey.

The hot springs are covered in minerals left by the water which gives them their white look. The Cotton Castles are on top of a large mountain in the ancient city of Hierapolis. The area was a popular tourist destination for those living in the country until the mid 1900's when the area was deemed a world heritage site and all of the hotels constructed near it had to be demolished.

You can still explore the area and bathe in the hot springs but due to the new laws wearing shoes in the pools in now prohibited to prevent the area being damaged.

There are 17 pools in total which have temperatures ranging from 35oc to 100oc the heat is created by underground volcanic activity which heats the flowing water and pressure that shoots it out of the ground.
A couple of warnings to those that are thinking of going to the area – The pools contain some tadpoles for those that don’t like swimming with the fish and it isn’t advised to go in the caves beneath the springs as they contain high amounts of carbon dioxide which could make you feel drowse.