The inexplicable rise of premium economy 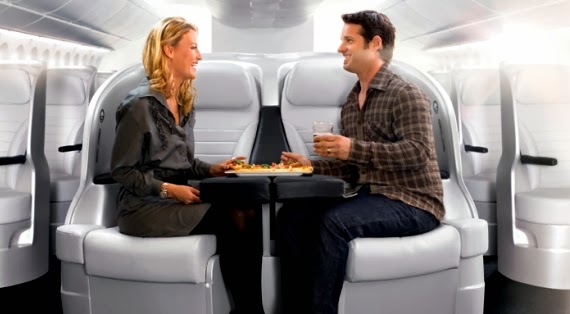 The rise of premium economy is being propelled by aeroplanes being fuller and more cramped than they’ve ever been. Not only do carriers fill more seats than ever before, they’re also cramming more people into less space, by narrowing the aisles and making seats smaller.

So it’s understandable that people want to escape ‘sardine class’ more than ever. But when you choose premium economy, you may have just transferred from a sardine tin to an anchovy tin. Some of the ‘upgrades’ offer hardly anything extra in terms of space or other perks.

It varies from airline to airline, but some get away with simply offering you the stuff that used to be free of charge in economy. True, sometimes you have to pay for things like headphones in some economy cabins now, but you’re not getting them for free when you fly premium economy either because the ticket price is usually between 50 and 200 per cent more.

So it's lose-lose, although the combined cost of headphones, a drink and whatever else you get for 'free' in premium economy is still way less than the difference in ticket prices. And in terms of leg room and seat space -- the stuff you can't buy when you're already squashed into sardine class -- premium economy averages around 6 inches extra leg room and seats 2 inches wider, which is barely noticeable.

Nevertheless, premium economy is set to grow more than any other class of seating in the next ten years. At 17.1% from new aircraft deliveries, the speed of growth in premium economy will be twice as fast as business (9.3%) and first class (1.6%). The proportion of economy to premium economy seats is also set to change, with airlines looking to make the balance more even.