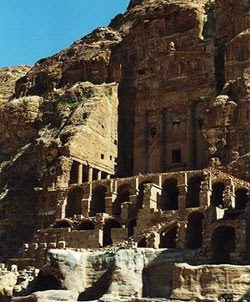 Although each structure is regarded with historical significance, some stand out because they have remained intact. Among them is the “El Deir” or the monastery as the carved columns are still preserved to this day. Another notable structure is the Urn Tomb as most of its architectural design still exists.
Because of the city’s popularity, getting to Petra is very easy. There are buses that go to Petra and tourists can also rent taxis.

The ancient city of Petra and it's structures carved in stone, is simply beautiful. A worm red light will sourround you as soon as you walk in making you feel as if in a magic place. Not to be missed the horse ride to get to Petra...

Beautiful place....A worm red light (given by the reflexes of the light on the carved stones) will sourround you as soon as you arrive in Petra.....Definitely not to be missed the horse ride to get there! a very nice alternative to buses!

Petra is amazing. In my opinion even more interesting than Egypt pyramids