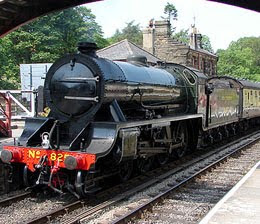 The North Yorkshire Moors Railway (NYMR) is one of the oldest operating railways in the UK. It is considered a “heritage railway” because it has operated for more than 100 years and the trains that operate through these railways are sometimes powered by traditional diesel. Steam engine trains are also used, providing a taste of the old railway experience.

The NYMR is not just a regular historical railway. It is 29 kilometres (18 miles) long and has 5-stops with one optional stop-over based on the traveller's request. The train goes through the New York Moors or more specifically from Whitby to Pickering. The railway was first used in 1836 and although revisions were made on the route, the railway is still operational from April to October. There are also occasions that the railway would is in use even in winter.

Tourists will surely enjoy the NYMR not only because of its historical setting but also because of the amenities provided. Families can board the train and dine there. There are also special rooms for those who want a homely atmosphere. Because of the additional amenities and comfort, the railway became one of the most popular attractions in the past few years.

To fully enjoy this historic train, it’s highly recommended to go for “Day Rover” option. This will allow you to be on the train for one day on various routes. Families will have bigger discounts and you can rent a cottage in the area, for a relaxing break after your train journey.

Thanks for sharing this interesting tidbit about the North Yorkshire Moors Railway. I've always been fascinated by train travel and steam engines, in particular. Will surely check this "heritage railway" when I get a chance to visit the UK, next year.