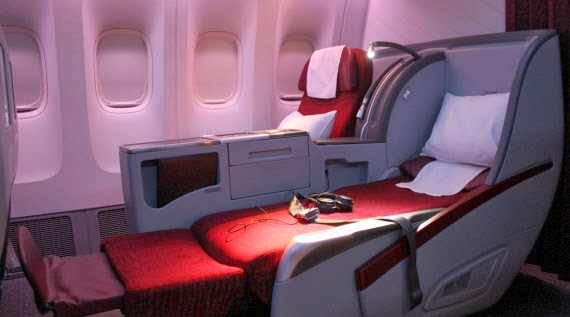 Qatar Airways will launch the first premium all-business class service from London’s Heathrow airport to its Doha hub, starting on May 15.

The Airbus A319 flight service will fly from Heathrow’s Terminal 4 daily at 9.55pm, while the service from Doha to Heathrow will depart daily at 2.50pm.

As the first all-business class service to launch from the Middle East, Qatar Airways has fitted its Airbus A319 with 40 Business Class seats, which recline fully into flat beds, with a single aisle separating 2 seats on either side. Customers will be able to contact associates in flight via SMS as GSM and GPRS connectivity, while a selection of over 900 films, tv shows, games and music channels will also be at their fingertips, via the airline’s Oryx entertainment system. Perks for this service start at the airport, where customers can enjoy the exclusivity of Doha’s Premium Terminal or of Heathrow’s new Qatar Airways lounge.

Currently operating five other daily flights from London Heathrow, UK travellers will enjoy the privacy and luxury of Qatar’s five-star hospitality on any of its flights.

Akbar Al Baker, Qatar Airways Chief Executive Officer said: “The airline goes to great lengths to consider passenger convenience and comfort at every step of their journey. The Doha – London Heathrow route is one of Qatar Airways’ most popular international routes and it was only fitting that we introduce an all Business Class service on this key route.”

Operating for 17 years, Qatar flies to 134 destinations, with 129 aircraft. The rate for this premium service has yet to be confirmed by Qatar Airways; however, the first round-trip flight, leaving Heathrow May 15 and returning from Doha on May 22, is priced at £4,325.